Informal markets have existed for centuries, as contexts where communities make sense of their resources and exchange value. However, urbanization has given these markets a more pronounced role particularly in meeting the needs of different classes of consumers and farmers. In many African countries, informal markets are the fastest ways for transferring income from buyers or consumers to farmers. 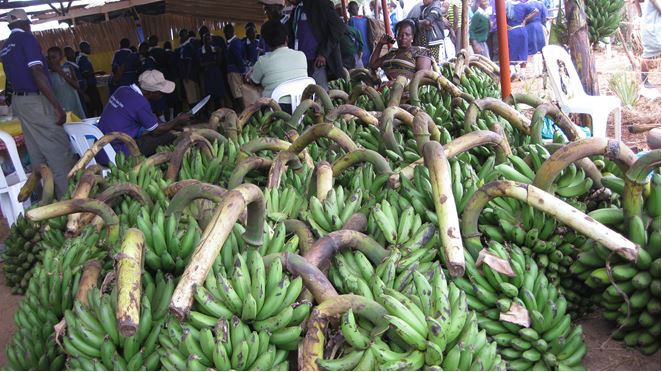 Where formal institutions like processing companies and supermarkets take two weeks to a month to pay farmers, informal markets pay farmers promptly. That is very important because farmers do not have control over external factors like rainfall, input prices, dry spells and droughts which cannot be managed through longer payment periods. Unfortunately, financial inclusion efforts are trying to foist an employer-employee mindset on smallholder farmers and informal markets when that is not how actors want to relate. While Point of Sale (POS) machines are ideal for formal actors like supermarkets, policy makers and financial institutions have not developed systems for farmers, traders and transporters whose transactions are based mostly on relationships. Trying to force farmers and traders into a formal financial system without taking into account several unique elements is proving counter-productive.

The informal agriculture market as a bank

To the extent each informal market has a certain amount of money in circulation all the time, farmers use their commodities to withdraw money from the market. Likewise, when traders buy commodities from farmers in the market, they deposit their money into commodities until they get money from the next buyer. This deposit and withdrawal process goes on up to the end user. The entire process accelerates   development along agricultural value chains by avoiding barriers in transaction systems like those in formal systems. Where a farmer or trader would spend hours in a bank queue to get cash or make a transfer, in the market it takes less than a minute to do a transaction.

More importantly, where cash transactions happen between farmers, traders and transporters in the informal market, no charges are incurred. Conversely, where farmers and traders transact through formal banks, transferring money from a trader’s bank account into a farmer’s bank account would cost $5 through bank transfer, irrespective of amount transferred. There are also charges when using mobile transfer from one account to another. Given that a trader can do at least 100 transactions a day, using mobile or bank transfer will result in a lot of money going to the bank or Mobile Network Operator (MNO).  This money taken out through charges is no longer part of the commodity being traded or part of a farmer’s income. These charges are also passed on to several farmers, traders and consumers.

On the other hand, in the informal market, farmers get more cash from money in circulation. Markets have a much higher velocity of money (rate at which money changes hands) and this has implications on development. Where some formal actors keep money for 24 hours or more before hoarding stock, it means the money is lying dormant when it could be used to fuel development. If the farmer had plans to use $1000 from produce sales to buy inputs but it takes 30 days to get that money from a supermarket or processors, it means inputs worth $1000 that could have been instantly bought by the farmer lie dormant (ideal dormant locked by the transaction system).  The land on which the inputs were supposed to be used lies dormant for a month, same applies with labor and water which gets wasted, evaporates or the water tables become depleted with some water flowing along the river.

Delays in payments have opportunity cost implications along the value chains as well as resources. Not to mention business opportunities like missing orders. Some inconsistencies in supply are caused by delayed payment system.  These hidden costs derail development.  There is need for an assessment of how much money is locked in formal transaction systems per day or per week and implications in terms of business opportunity costs.  The recipient is not using the money and the depositor is also not using the money- so this doubles the costs.  Farmers are mindful of the opportunity costs and that is why they would rather go to the informal market. To stay relevant, banks should creatively tap into the informal market system

Informal markets absorb and reduce opportunity costs incurred along transaction systems. In most developing countries, financial systems are still colonial and have not invested in carefully segmenting clients or users. For examples, car sales and agricultural traders are subjected to the same transaction system. Car sales do not mind bank transfers because there are checks and balances undertaken before a vehicle fully changes ownership. But when it comes to trading of already ripened commodities in trading businesses like agricultural markets where the rate at which money changes hands is linked to the rate at which transaction takes place, different charges are needed. If charges are part of the transaction, they contribute a significant cost to the transactions.

Financial institutions should invest in segmenting markets for transacting purposes

One segment like agriculture markets, with many transactions processes per given period, should attract lower charges. Banks can still earn the same if not more revenue due to the number of transactions, riding on the volume of transaction rather than the value. At the moment, when selling a vehicle one can be charged $5 per transaction by the bank, same as someone buying a bucket of groundnuts worth $20 which is 25% charge.  If someone is charge $5 for a vehicle worth $5000 that is 0.1% and insignificant.

In the market, money plays its real role as a medium of exchange where, otherwise, there is a lot of commodities exchanging their value. A farmer can sell agricultural commodities for $100 and move on to the next stall to buy fertilizer worth $50. The movement of $50 from a commodity trader to an input trader remains the same as the medium of exchange.  But if the money goes through the financial system, $5 will be taken away and this means the role of money as a medium of exchange is undermined.  That is why in some parts of rural Africa, farmers and grocery stores have resorted to using commodities like maize to exchange with cooking oil with no need for money in order to preserve value.

Through charges, banks have become dangerous middlemen. Even if people invest in acquiring bank cards, they continue to be charged for unexplained services.  Mobile money is also associated with a lot of double charging, for instance, for a trader or farmer to do a mobile transfer, airtime is needed, which is another charge through USSD and other costs. Instead of adding value, financial institutions and mobile money service providers are subtracting value from farmers, traders and other actors who are walking way with less money compared to if they use cash transactions. In order to circumvent some of these issues, traders and SMEs have devised ways of locking money within their commodities ecosystem.

The market as a knowledge aggregator and distributor

Informal markets have invisible ways of aggregating knowledge from various sources, areas, ages and different gender.  That is why farmers who frequent informal agriculture markets thrive more than those who do not.  It is due to knowledge from the market, for instance, knowledge about tastes and preferences. The informal market also has an open feedback mechanism. If farmers go to supermarkets or formal companies, they will not get synthesized knowledge from diverse sources but a list of specifications provided in an arrogant, big brother mentality.

The pre-colonial economic model on which formal financing systems are based cannot be used to jump-start the new economy. What value added services can a farmer or trader get from the bank?  Informal markets are an example of selling a value. If you do not have a Unique Selling Proposition (USP) for your products you will not be able to sell. If it was not for formal employers who insist on salaries passing through the formal banking system, most African banks would have collapsed a long time ago. Very few workers would volunteer to have their money pass through banks where value is subtracted instead of being added. While formal systems are too rigid for the new fast moving network economy, informal markets have in-built flexibility to suit the fast-moving economy and ecosystems.  Unfortunately, there are still fewer systems for building knowledge from informal market ecosystems.