Street markets or roadside food markets have remained a permanent feature in most developing countries. The fact that these markets continue to flourish alongside emerging shopping malls shows they occupy a unique position in commercial activities.  Informal markets were previously designed for disadvantaged, low income households with ad hoc incomes who were considered not able to buy from supermarkets and formal value chains.  However, spending years in the informal business has seen some of the traders and vendor upgrading their standards to cater for diverse consumer classes. Consequently, informal markets are now part of a business growth path comprising food chain stores, hotels, restaurants and formal institutions.  In order to stay in this game, traders and farmer have been compelled to acquire a certain level of tertiary knowledge, resources and entrepreneurial skills. 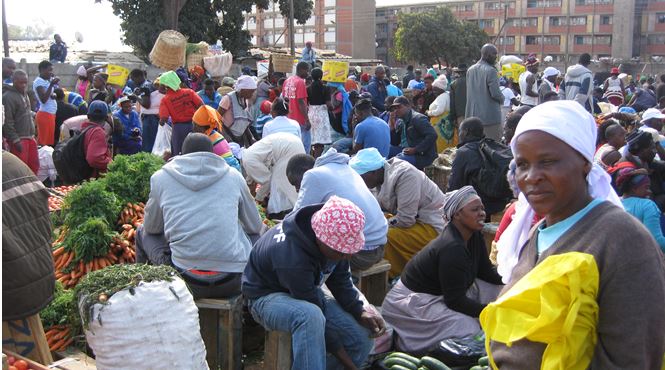 On the other hand, this evolution in markets has brought its own challenges in many African countries where agriculture continues to be the backbone of the economy. The formerly employed and pensioners with reliable sources of income have been attracted to moonlight in informal markets, pushing out poor and low income traders in whose name informal markets were originally set up. Instead of being a domain for the poor, informal markets are now for every business-minded individual. Most of these markets have become part of solid business value chains able to ensure consistency in supply as opposed to ad hoc participation in the market.

African food markets are no longer just seasonal events where farmers come to the market according to seasons.  Middle class farmers who have embraced farming as a business are now found in the market consistently since they have built niche markets that have to be continuously served. In order to consolidate its aggregation role, each informal market now requires resources to be able to ensure necessities like potatoes, vegetables, eggs, fish and other commodities are always available.

As niches become highly competitive, ad hoc traders and market participants are being pushed closer to the supply side like road side markets in farming areas and village markets. In these areas, ad hoc traders become small aggregators with just enough resources for pulling a few resources from farming areas.  Once in a while, marginal traders can go to big urban markets where they buy a basket of banana and a crate of tomatoes for selling in local markets where these commodities are not produced.

With urban informal markets becoming part of regular value chains, the need for middle class markets, different from supermarkets or food chain stores has become more urgent in many African cities. New land uses, accompanied by investment in agricultural value chains by different classes of actors, are producing more commodities than can be handled by supermarkets and informal markets traditionally meant for the poor. This has seen many of the commodities overflowing into street sales, some sold from stationery vehicles and makeshift market stalls. Middle class markets from which food chain stores, processors and even exporters can get commodities consistently represent the future of agriculture in developing countries.

Almost everyone now knows how to produce commodities but very few know how to deal with perishables once they have been harvested. Neither are many producers able to anticipate the speed at which consumers consume and come back to buy or re-order.  Ministers, members of parliament, bankers, lawyers, accountants, university professors and other professionals interested in agriculture are all competing in producing and selling agricultural commodities through informal markets when they should invest in building a middle class market of their own.  How can a whole minister compete to sell cabbages in the same informal market with grandmothers struggling to feed orphans?

Need for careful characterization of markets

In addition to congestion in most informal markets, there is limited differentiation in terms grading and quality. For instance, the prices of a box of tomatoes can range from $1 to $8 in the same informal market yet such a market should be for low income consumers and traders. A trader who sells fruits for $1, another  one who sets a price by counting the number of fruits in a pile and yet another one who sells for $10 for the same commodity quantity, are all found in one market.  While this is good for diversity, it inhibits definition of business boundaries.  Absence of proper clustering means you cannot separate classes or good products from bad products.

Clear characterization and classification can support the evolution of a middle class industry and ensure the definition of Micro, Small, Medium and Large does not just remain on paper.  Different classes should be in specific locations – building layers of one enterprises on another. Where these classes are all in one space, micro and small enterprises end up being over-shadowed by medium and large actors.  It should not just be about numbers of actors in one category but different capacities.  Some commodities can have differently entrepreneurial capacity, quality, standards, formality like registration and markets. For instance, those in processing industries may not want to see commodities being delivered in baskets.

Appeal to a broad section of the middle class

There is need for middle class traders, saving the up-market and farmers like pensioners with high capacity to produce more volumes. For most pensioners, farming is the next career step so they should have appropriate markets. Most pensioners have resources and need a market that can ensure good return on investment (ROI). Some have built networks in government institutions, hotels and even foreign markets. For instance former ambassadors in foreign countries need a market that acts as a holding centre before they connect and ship commodities to their networks in foreign countries. They cannot use informal markets or their farms as holding centres.

Agribusiness is no longer for the uneducated or illiterate. It is now export- focused and a career path for many people. With high literacy levels, it means a lot of ethical considerations like licensing, book keeping and other formal requirements are critical. Unfortunately, governance approaches in developing countries still focus controlling than enabling the growth of local informal economies. Public expenditure is also not taking these markets into account. Collecting and sharing evidence can assist in positioning informal markets for public expenditure. Government input programs tend to absorb a lot of the public expenditure but incentivize corporate industries. Informal markets are different from shopping mall-driven models where people are working long hours for low wages.  On what terms are smallholder farmers in developing countries participating in contract farming models and value chains?  In most cases they are just providing land, cheap labor and pushed into debt cycles for the sake of obtaining inputs. An integral part of informal food markets is the capacity of people to mobilize and exchange food commodities, informed by an intuitive cultural value of food.