Instead of competing for external extractive investors and Foreign Direct Investment (FDI), African countries should start building home-grown economies anchored on Indigenous Knowledge Systems (IKS) which continue to keep rural communities resilient. IKS have traditionally been adept at strengthening relationships, trust, social fabrics as well as people’s passion and commitment to grow their communities. That serious commitment to preserve their identities through Communities of Practice (CoPs) saw individuals and communities generating and sharing knowledge as a key part of development 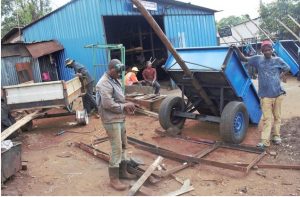 Borrowing from tradition, in many rural African communities, knowledge has remained a public good to be always developed and enriched for the benefit of the entire community. That is how communities have developed coping strategies against challenges like drought. Knowledge sharing and concerted efforts to see their communities surviving is a major reason why we still have people living in known drought-prone regions. Otherwise we would not be having communities in deserts with everyone having migrated to high rainfall areas. There would be no people in Binga, Thsolotsho and similar dry areas across Africa. IKS are the opposite of formal education systems which encourage people to run away from challenges and go to the diaspora.

IKS had a way of empowering communities to adapt to changes within their community.  Such an attitude was embedded in beliefs and values expressed through proverbs, idioms and metaphors like Haunga pisi imba nokuti yaita tsikidzi which literary means you cannot run away or destroy your homestead merely because you are facing challenges. Each African community and language has several communicating such values. For instance, many indigenous language idioms communicate the value of people working together as a community – Rume rimwe harikombe churu. Chara chimwe hachitsvanye inda.

The power of sharing resources

IKS continue to espouse the fact that you cannot have it all as an individual or community. That spirit of sharing made African communities more resilient and has spilled over into the modern era. Today, in some communities an integration of different socio-economic actors like business people, traditional leaders, politicians, herbalist, agro-dealers and very good farmers (hurudza) comes from IKS. Where they co-exist, all these actors contribute their collective expertise and knowledge toward addressing challenges as they emerge. For example, chiefs are in charge of agriculture and natural resources, councilors tackle political issues while herbalists take care of both animal and human health. This creates a holistic basket of socio-economic-political issues that are addressed collectively. Such a holistic approach is anchored on IKS through the spirit of sharing, norms, values, trust and relationships.

Contradictions brought by the new economy

As African countries embraced the new formal economy built around urban settings, most of the public good knowledge under IKS started to be privatized. There is a very thin relationship between urban residents, making it difficult to generate coping mechanisms that characterize rural areas. While urban communities may face the same challenges like poor sanitation, coping is considered an individual’s private affair. Contrary to rural areas where social classes are invisible, in cities, social classes are organized around economic factors like income levels, location, wealth status and level of education. These factors influence the building of CoPs comprising those from the same social class. Money determines your location and people in your location become your relatives. That is why informal markets and SMEs have built their close communities based on their own social classes.

From competition to collusion

In cities, relationships are usually built around a number of individual firms. The collapse of formal industries in countries like Zimbabwe has reduced relationships among previous firms and the existence of few individual firms has translated to less competition but more collusion. The more these few actors collude, the more they gain power. This is what has happened to Zimbabwe’s financial sector where a few players with viable businesses collude to take advantage of policy gaps, leaving policy makers with no options. If policy makers decide to introduce regulations, those colluding scream to be left alone.

Financial businesses have collapsed due to failure by executives to build alternative viable business models instead of continuing to rely on administration costs like bank charges as a source of income.  As if that is not enough, traditional financial institutions have lost business to mobile money corporates. The  Reserve Bank of Zimbabwe has also lost its power over coins and notes to corporates in charge of digital money. There is now a monopoly in the financial sector and the more power is given to a single player, the more that player becomes a monopoly, frequently threatening to withdraw services.

Monopolies tend to weaken policy makers and policy initiatives. They can do what they want. For instance, they can single handedly increase the cost of their services knowing that there is no close substitute for transactions like paying for food, fuel, transport and other transactions. This is different from rural communities where IKS has empowered communities to harness alternatives. Rather than being stuck with expensive transaction charges, rural communities switch to barter trade. For instance, grain milling services can be paid using maize which can also be exchanged with chickens.

Limitations of trying to resuscitate an economy using borrowed money

Challenges presented by monopolies extend to the predicament of African governments trying to revive their economies using borrowed money. When an economy collapses it is better for policy makers to gather evidence and conduct investigations into why it has failed. This prevents throwing money at problems. Several African governments are running to the IMF when it is not a solution. The real solution could come from understanding existing economic actors and resources. How are rural communities taping into IKS to survive?  Dialogue to answer such a fundamental question is not happening at national policy levels. Policy makers are depending on a small coterie of economists, so-called captains of industry and academics, most of whom are out of touch with reality.

When a country is desperate, it creates a fertile ground for opportunists masquerading as solution bearers.  Desperation around employment opportunities, food, essential services like health, education and clothing increases. For instance,  almost every African country now has a thriving second-hand clothes industry but no one stops to ask where those clothes are coming from and what kind of people were wearing them.  Were the previous wearers of those clothes killed by hurricanes or what? It is also in such an environment that corruption thrives because people have no options except resorting to corrupt tendencies.

There is proof that African countries like Zimbabwe continue to lack home-grown solutions to most challenges. Tertiary education is failing to generate home-grown solutions, jumping to talk about complicated issues like Education 5.0 when basic issues like availing clean water, building feeder roads so that farmers bring commodities to the market and building decent markets remain unsolved. What does Education 5.0 mean to a grandmother trying to process small grains so that she can send her grandchildren to school?

On the other hand, instead of addressing root causes, African policy makers think increasing salaries is a solution. They are ignoring common sense which has proved that increasing money supply in a country facing food shortages increases inflation. Too much money starts chasing few commodities and money ceases to be a medium of exchange and becomes a commodity. The fewer the economic actors closer to policy makers, the less useful information is available to policy makers.

Merits of going back to the drawing board

It is better for African government to go back to the drawing board and look closely at existing economic drivers, then introduce systems of collecting evidence that shows how rural communities are surviving.  Data and evidence should be gathered from communities, districts, economic drivers and informal markets where more than 90% of SMEs and their businesses are transacting. Government cannot realistically expect one or two remaining oil processing companies to provide reliable statistics about the entire economy. Instead of relying on four or five big grain millers, policy makers should get statistics from thousands of small millers or Zvigayo providing milling services to both rural and urban populations. Thousands of SMEs that are quietly processing potatoes into chips can be reliable sources of evidence than a few big companies operating at below their capacity. Hundreds of peanut butter processors that are replacing big processors cannot be ignored by a government that really wants to understand what is going on. Building a home-grown economy starts from all these small actors and processors now anchoring the consumer base – reflecting economic growth direction and pattern.

While formalizing SMEs is one way of normalizing the economy, it does not help to continue using terms like ‘informal’ to describe new economic actors. Something ‘informal’ is still considered illegal by financial institutions and policy makers. Several colonial terms have to be corrected and these include referring to indigenous miners as Makorokoza, indigenous hunters as poachers while outsiders are called professional hunters. Also unhelpful is referring to new indigenous farmers as invaders while former farmers from outside were given decent labels like settlers.

Policy effort should go towards understanding the role of rural communities and SMEs as well as the kind of support they need. Instead of going around spending money looking for reluctant investors, African governments need to think seriously about building home-grown economies from what is already working. Such efforts should include revising industrial land ownership structures. Currently, private properties acquired during the colonial era remain under-utilized while the productive SME sector has no decent working space.

In Zimbabwe, more than 50% of industries have collapsed but their ruins are seating on prime land while the vibrant SMEs are crowded in Mbare, Siyaso as well as high density areas like Gazaland. Some of the  urban prime land is being turned into industrial parks that are not relevant to the SME economy. Developing home-grown economies demands revising these issues and weaning policies from colonial dominance as opposed to looking for outsiders. Instead of being subjected to tough conditions of survival by external financiers, African governments should go back to their roots most of which are still intact. Why should African policy makers continue measuring their food basket using margarine and bread, expressed dollars and cents and call it a national food basket? What are the components of an authentic rural food basket on which the majority depends and is worthy to be considered a national food basket?

IKS enables young people to build coping strategies as they grow up. If life gets tough in the city, those with a farming background can easily go back farming and come back after harvesting. That is why seasonal labor migration is such a big deal in much of Africa and is a key part of resilience. IKS define the culture and growth pathways of a community, especially if it has not been infiltrated by external knowledge and values. It also informs coping strategies – how communities survive without external support.  It also becomes a living reference book from which a community defines what is good and what is wrong. Gender roles are better recognized and respected under IKS. For instance, in-built values like Mombe yeUmai, Inkomo kaMama have remained a powerful empowerment mechanism for African women unlike imported gender norms being foisted on African communities.